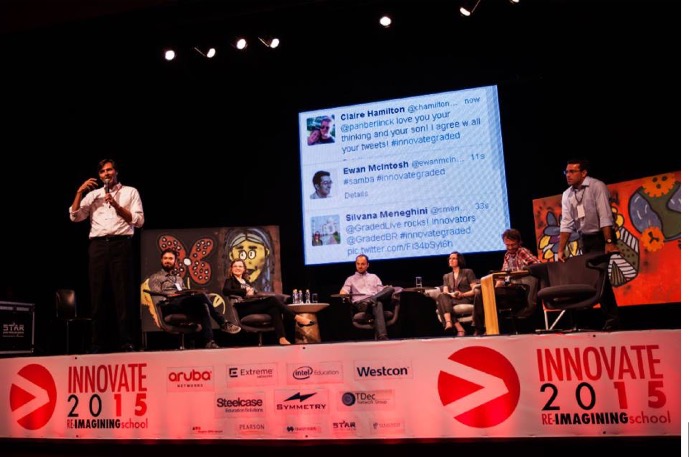 Congratulations to all contributors to last week’s Innovate conference. Similar to the 2013 conference, this year began with a panel in the auditorium. Parents, students, faculty, and keynote speakers listened to a discussion of what innovate means, what makes a person innovative, and how to incorporate innovation in the classroom.

The panel included the use of a Twitter feed dedicated to the conference, and the audience sent their questions with the hashtag #innovategraded. Pedro Salles Leite, founder of Graded Live, created an app to better facilitate the discussion. Another Graded Live member, Luiza Mizrahi, selected discussion-worthy questions and sent them on stage to journalist Rodrigo Bocardi, who was the panel facilitator. The technology used was phenomenal, and the idea of getting the audience involved via Twitter was a great demonstration of students being innovative. Not only did Graded Live select questions, but they also filmed the event. (For those who missed it, you can go to their website.)

The speakers began discussing what innovation means to them, each giving their own answers, but in the end having the unanimous conclusion that innovation is coming up with a creative solution to a problem. Suzie Boss, a writer and educational consultant, mentioned how innovating doesn’t emerge over night; it’s a process of problem solving and even finding problems worth solving.

The editor-in-chief of Superinteressante, Denis Russo Burgierman, made the point that “we are always searching for innovation.” Innovation is all around us, what we do, what we think, and what we create. Furthermore, the speakers discussed how innovation plays a role in publications, schools, social media, and in the new professions we have today. They mentioned how failure is the most important rule of innovating: many treat failure as terrible and give up, but growth only happens when we learn from mistakes.

Samsung researcher Vanessa Testoni said, “A person can spend years working on a project and if they fail in the end, it’s okay. It’s not school.” She also mentioned how schools don’t expect students to fail; they expect them to do well on the test. Yet in reality life is about failing, and people are expected to fail in order to succeed. Testoni also mentioned that “if you don’t fail it means you’re not doing something new, because if it’s new you don’t know the results.” It was thought-provoking to consider new things in that way. We’re so used to the idea that failing means punishment, not seeing it in a positive way.

As a final point the panel talked about the future. Burgierman mentioned how in São Paulo we wake up one day to a drought and the next a flooded city. Children in the city are being exposed to and affected by this instability. However, Burgierman thinks that being exposed to this problem makes them unique, with stories to tell and ideas to share. As we know, being part of an international community, meeting new people, learning about different cultures makes the Graded community more open-minded, helping its students to imagine how they could change the world. The entire panel brought answers, questions, inspiration, and innovative ideas. Now we will try our best to incorporate these ideas in our daily lives.