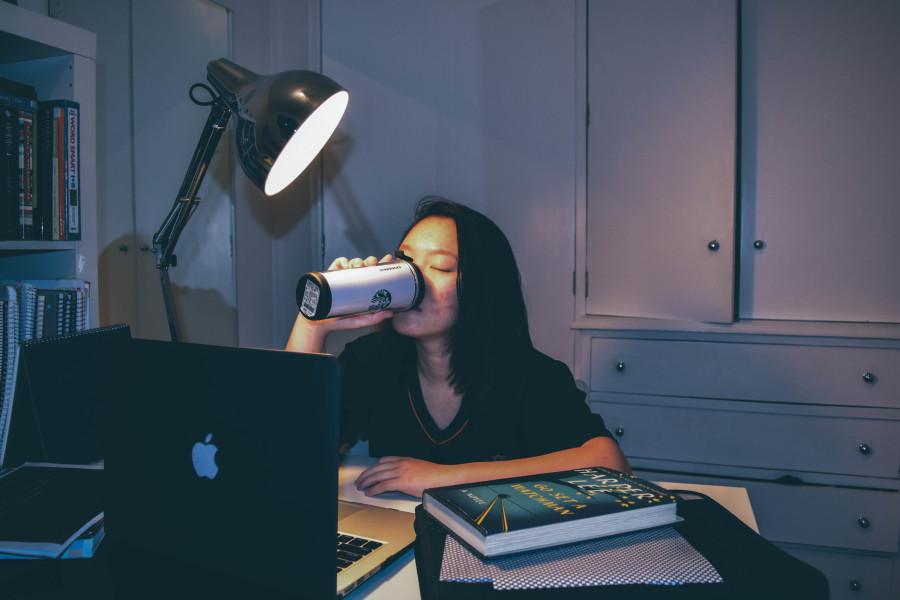 Dracula, Alucard, Louis de Point du Lac, and Barnabas Collins. These are a few names that come to mind when someone says ‘vampire’. People watch these bloodsuckers on the silver screen, dress up like them on Halloween, and sometimes even aspire to be like them–despite vampirism being labeled as a curse. However, we are not far from these cold-blooded monsters with the recent discovery of Student Vampirism.

This black liquid gives them the energy to perform daily tasks, and their need for it is insatiable. Beware, Starbucks and snack bars, they are coming for you.

Student vampires won’t turn into dust upon contact with sunlight, but will definitely avoid it by remaining in poorly lit rooms in front of their computer screens. An example of their aversion to bright light is seen by the low brightness of their screens and their panic when a teacher announces they are turning the lights back on.

In addition, student vampires share their bloodsucking counterparts’ sleeping habits. They stay up throughout the night, allegedly completing assignments, and sleep through the day (or at least try to). A dead giveaway of a student vampire who maintains this habit are dark bags under their eyes that never really go away.

Moreover, student vampires, like any other vampire, are prone to mood swings. It is not unusual to see one going from grumpy to grouchy to annoyed in a matter of seconds. Even simple phrases can have a great effect on their mood. The words, “summative,” “in-class,” and  “essay,” at least when combined, causes widespread panic in a class with student vampires. On the other end of the spectrum, “snackbar” and “break”, will have an opposite effect. Fittingly, a good way to calm down an angry vampire is to feed them, preferably pizza and pão de queijos.

However, like any curse, student vampirism comes with many positive powers. Student vampires have the amazing ability to finish assignments that should have been done over the span of weeks in a single night (although the quality is dubious). Their sense of smell is heightened, leading to the ability to smell food entire classrooms away. They also have a creative edge against their human counterparts, giving them the ability to create excuses when missing assignments. This surprising bargaining skill is also often used to argue that a summative should be delayed for another week. This skill is also used to convince themselves that they can definitely finish their homework if they watch just one more episode of their favorite Netflix show. Additionally, student vampires boast a fast metabolism, allowing them to binge-eat their favorite treats. Despite the high caloric intake, many will disagree with anybody claiming the ability to eat exorbitant amounts of cookies is, in fact, not a superpower.

Student vampirism is especially common. This is due to the fact that, unlike regular vampirism, one does not have to be bitten by another to be cursed. A simple enrollment in a high school is all it takes; and the further into high school, the more likely it is for one to contract this kind of vampirism. Thankfully, there is a treatment: vacation. Throughout this glorious period of time, the vampirism leaves the student’s body despite threatening its return with the new semester.