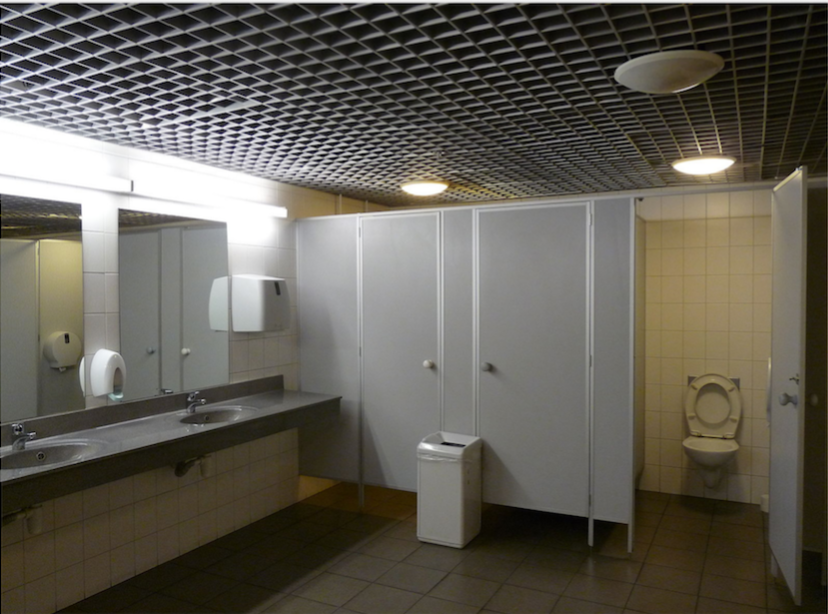 “The train is arriving in “Middleton Station”. Please take two steps back for your own safety.”

I hear a man inside the bathroom stall grabbing the toilet paper and flushing the toilet. While zipping his pants, the man hurriedly walks out. Facing me, he washes his hands in the sink, checks himself out, then running out to catch his train.

I’ve been installed here for more than forty years. They’ve renovated the bathroom numerous times–changed the toilets, placed new hand drying machines, and so forth. But I’ve always remained here, and the patterns are same: people come, leave, look at me, leave. It’s always been the same.

A man–he is in his late thirties and has a baggy, dirty cardigan and ripped jeans–slowly trudges in. Light streaks of grey creep into his beard growing under his chin. His hair is dry and pale. He looks around, checking to see if anyone else is in the bathroom. Upon realizing that he is alone, he walks towards me and stares straight at me with desperate eyes. I can now see a drop of sweat trickle down the side of his forehead and tears streaming from his eyes. He crashes his hands onto me and says to himself: “It’s unfair. I’m a good man. I didn’t want to end the situation like this. It’s just unfair!”

I hear footsteps from afar, and so does the man. He hastily walks into one of the stalls and locks the door while a group of boys comes in, joking around about an embarrassing incident that happened at school. When they leave, the silence dawns on me again. I hear subtle shuffling from the man’s stall, then the clicks on a phone to dial someone. Silence returns again. Then, I hear the man speak:

“Marco, I messed up. I messed up real bad.” His voice starts to shake. “I did it. I had to steal the money.” I hear small, angered shouts from the other side of the phone. The man continues: “You know I’ve planned this for a while. You know it’s why I haven’t been around. I’ve tried everything I can, but I had too little time. Yes, the bank.” He pauses for a second and continues in a more urgent, angered voice: “I can’t. My daughter’s goddam hospital fee! If I don’t get the money to the hospital now, she is going to die; do you understand? My only daughter is going to die!” He starts to sob. “Man, this is all I can do. Yes, I know they’re after me; they’ll be here any second. I’m going to wire the money now. But Marco, whatever happens, keep an–dude, listen to me. Keep an eye on her. I need you to keep an eye on her. Okay? You’re all I trust right now.” Before the other side of the phone finishes his sentence, the man hangs up.

He takes a deep breath. I hear him rolling the paper, blowing his nose. He takes another deep breath. He clicks some buttons on his phone, and I assume he’s wiring the money. The bell rings.

He walks out of the stall. While his face seems to have aged 20 years, his body is straight. He looks taller. Determined. He stops in front of me. He brushes his hair back and stares at me, looking through me to himself. I could see the uncertain certainty in his eyes, and so does he. Still staring at me, he slowly clicks on a speed dial and puts the phone to his ears. He starts speaking in a calm, loving voice:

“Hey, Honey. How are you feeling? Better? Yeah, of course. What? No, daddy will be there in the hospital soon; I’ve just been meeting some friends recently. Of course, I have it all figured out; Daddy is just fine. All you need to do before you see daddy is to be brave and go through with the surgery, and daddy will be waiting outside for you. Okay? I love you so much, Mary.”

I hear heavy footsteps approaching, with loud men speaking into their handheld transceivers, and so does he. He hangs up. His face suddenly relaxes, with tears drying up on his cheeks, and he lets go of his phone. He waits.