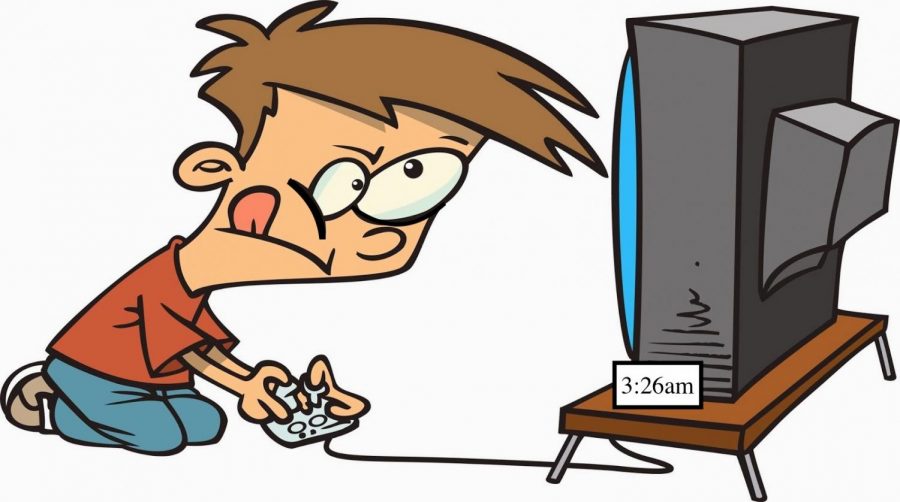 That stereotypical 30-year-old who plays video games in their parent’s basement all day is rapidly turning into a common reality. Today, children all over the world are spending over six hours a week playing video games. Not only have studies proven the negative effects that a large amount of time spent online has towards their behavior, but these long hours are also becoming an addiction.

Take Fortnite, for instance, an online video game released in 2017 which allows players to battle against each other in over seven platforms. In February of this year, “Fortnite recorded 3.4 million players at one time over the weekend,” surpassing the previous world record set by game PUBG of 3.2 million players at one time. In the game, you are transported to an island with 99 other players on a hot air balloon called a “battle bus” – your goal being to be the last one standing.

It is understandable why the game is so addicting – it provides the player with an adrenaline rush, forcing them to stay on their devices for a long time. The problem is that this behavior is an unhealthy addiction and one that slowly starts to take over the lives of the users. Therefore, in an attempt to discover how these video games – Fortnite, League of Legends, FIFA, and others – modify the social and personal lives of those who are addicted, The Talon set out to interview Graded students from both the high school and middle school.

When surveyed, most students believed they did not play too much because they had other priorities. However, when seventh-grader João Lima was asked the same question, he admitted to playing between 6-8 hours a day. He described his routine as getting home and playing with his friends until bedtime or one of his parents told him to stop. When talking about the subject of relationships, he had a typical response between many others interviewed – that video games improve our relations because we can play together. As the self-described “professional” Felipe Rabello, Graded senior,  acknowledged, video games allow people to build “connections [through other forms of] social activities”.

Consequently the creation of an online society where people are no longer required to communicate face to face – or live in “the real life,” as seventh-grader Mario Hernandez described it – is a misconception most teens have. This video game culture causes players to spend less time developing their social skills, as they start to lack real-life experiences. Although users believe video games don’t impact their social lives in a negative way, there was a shift in responses when they were asked if their family members have noted or complained about their long hours spent online. This was the case for freshman Thomas Alvez, who admitted to receiving many complaints due to his gaming.

Overall, 80% of the 10 Graded students surveyed responded that video games were not their priority, while the other 20% said that it varies depending on their mood, or how much homework they have. Consequently, when comparing this to pieces of data which shows that more than 70% of students play over one hour of video games per day, we can determine that most teens play as a distraction, while not realizing how immersed they are becoming into this online world.

The Talon has discovered how this video game phenomenon is one impacting children, teens and adults throughout the world, not just at Graded.