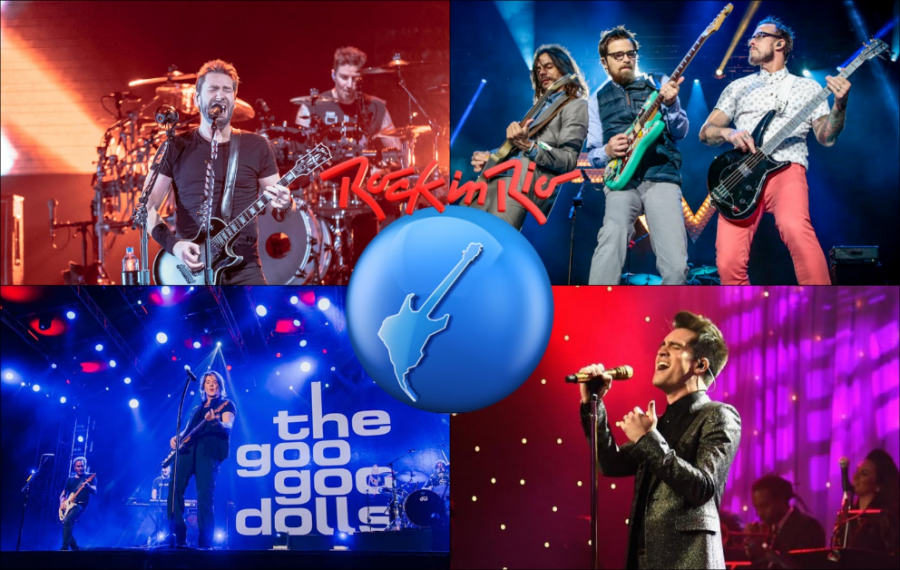 On September 27th, right after CWW ended, Rock in Rio started. It went on for two weekends; from the 27th to the 29th, and from October 3rd to the 6th. Most high schoolers know Drake, Imagine Dragons, Red Hot Chili Peppers, and Bon Jovi, who all performed at Rock in Rio. However, some of the artists who performed at the festival aren’t as well known by high schoolers. In this article, we’re going to be looking at some of those lesser-known artists, and hopefully convince you to give them a listen.

About them: Formed in 1992, Weezer is an alternative rock band loved by many for their imaginative lyrics and great instrumentals. Lead singer Rivers Cuomo and drummer Patrick Wilson have been with the band for the entirety of it’s life, as other members have come and gone. If you ever see one of their concerts, you should expect them to do a rock song cover; after all, they released their Teal Album earlier in 2019, which is an album full of covers of famous songs, such as Toto’s “Africa” and Electric Light Orchestra’s “Mr. Blue Sky”. The reasons Weezer does covers is because they want to pay homage to some of their inspirations, as seen with their cover of a-ha’s “Take On Me”. Some of their hits include “Beverly Hills” and “Say It Ain’t So”.

A song to know: “Buddy Holly” starts off fantastically as the self-proclaimed geek who is Rivers Cuomo uses words like “homies” and “dissin”, which was terminology used exclusively in poorer American communities at the time, especially in Los Angeles, where the band was formed. The song’s music video will send you back in time, as it was filmed in the 90’s, while being set in a show from the 70’s, which takes place in the 50’s. Also, it’s worth noting that the namesake of the song, who tragically passed away on what came to be known as “The Day the Music Died” (due to Don McLean’s “American Pie”), really does look like Cuomo.

About them: In May 2013, the readers of The Rolling Stone magazine voted them as the second worst band of the 1990s, but in my opinion, that’s not the case. The criticism they receive stems from their use of raunchy themes and the belief that all their songs sound the same. Formed by brothers Chad, Mike, and Brandon Kroeger and their friend Ryan Peake, Nickelback have been around since 1995. The fact that they have sold over 50 million albums is impressive, and becomes even more so when you realize that their genre (post-grunge) is one that is not as popular as it once was. A couple of their better-known songs are “Photograph” and “Far Away”.

A song to know: Released in 2001, “How You Remind Me” was the lead single off of their album Silver Side Up. It finished 1st on Billboard’s year-end hot 100 singles for 2002. In an interview with MTV, Chad Kroeger revealed he wrote the lyrics to the song about his dysfunctional relationship with his ex-girlfriend. Kroeger said he aimed to make the lyrics ambiguous in an effort to make the song relatable.

About them: Formed in 1986, the Goo Goo Dolls have sold over 12 million albums worldwide. Two of the three founding members are the only current official members of the band; those being lead singer Johnny Rzeznik and bassist Robby Takac. Their newest album, titled Miracle Pill, was released on September 13th, and two tracks were released prior to the launch of the whole album, being “Money, Fame, & Fortune”, and the title track, “Miracle Pill”. Some of their best songs include  “Slide” and “Name”.

A song to know: Popularized by the movie for which it was written for, City of Angels, “Iris” is the Goo Goo Dolls’ signature song. From the 1998 album Dizzy Up the Girl, with songs such as “Amigone” and “Black Balloon”, “Iris” boasts a 1 minute and 35 second instrumental with passionate, wistful lyrics. Rzeznik wrote the song trying to assimilate himself to the character Nicholas Cage played in City of Angels, and his main goal was to support the vision of the director and story.

Panic! at the Disco

About them: Commonly abbreviated as P!ATD, they are arguably the best known artist in this article. A common misconception about them is that they are a group; while it is true that they were formed by 4 members back in 2004, as of 2015, their sole member is Brendon Urie. As such, Urie plays all instruments (guitar, bass, drums, etc.) for recordings while also providing vocals. That said, he does perform with a band during live shows. A hit song while the band was still a group is “I Write Sins Not Tragedies”; a hit from the Brendon Urie solo-era is “High Hopes”.

A song to know: Not to be confused with Outkast’s “Ms. Jackson”, P!ATD’s “Miss Jackson” tells the story of a woman who manipulates men into falling in love with her. Released in 2013, Urie initially planned to name the woman after a 50’s actress, such as Marilyn Monroe or Audrey Hepburn. However, while watching old music videos, Urie got a “next video” recommendation for Janet Jackson’s “Nasty”. As such, he decided to name the song after her and added the lyrics “are you nasty?” in reference to her song.