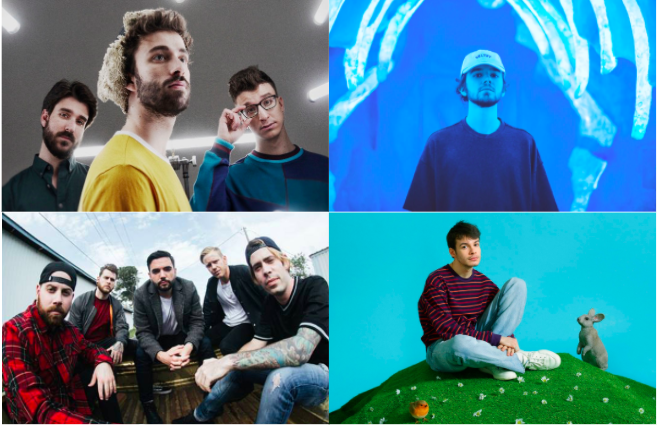 Every year, tons of Graded students (and some teachers!) flock to the Interlagos race circuit for a weekend to enjoy some of the best and most popular musicians in the world. This year, Lollapalooza was scheduled to take place in early April and was pushed back to December due to the COVID-19 pandemic. In September, it was announced through their website and Instagram page that the festival was pushed back to September of 2021. This means that alongside the new dates, there will also be a new line-up that hasn’t been released yet. Assuming that it’ll change, which is likely, you’ll miss out on the chance to check out some of the lesser-known artists since Lolla serves as an opportunity to “discover” new musicians. Everyone knows the likes of Travis Scott, Guns N’ Roses, Lana Del Rey, and The Strokes– all of whom were set to attend the festival– but who else was going to perform? The Talon has come up with a few artists who you missed out on who you might like.
AJR is an indie-pop band composed of brothers Adam, Jack, and Ryan Metzger; the band’s name stems from the first letter of each brother’s name. In 2012, Ryan tweeted out a video of one of the band’s songs (“I’m Ready”) to many celebrities, including Sia, who told her manager about them. This helped the band gain attention, and they released their debut EP about a year later, which was originally called 6foot1 but was renamed I’m Ready. The title track features a sample of SpongeBob saying the title “I’m Ready” several times, as it’s one of his catchphrases. Since then, AJR has released three albums and released a song called “It’s On Us” in collaboration with Barack Obama’s campaign of the same name, which combats sexual assault on college campuses. A few other AJR songs worth noting are “Sober Up”, “100 Bad Days”, and “Drama”.
Madeon is a French DJ who first gained attention for his live mashup called “Pop Culture”, which he published on YouTube back in 2011. It’s incredibly impressive as it combines 39 songs, and Madeon was just 17 when creating it. His real name is Hugo Leclercq, and his style of music is an interesting fusion of electropop and house. Those who have played FIFA may be familiar with some of his songs; “Finale” (featuring Nicholas Petricca of Walk the Moon), “Imperium”, and “Shelter” (with Porter Robinson) were on the 13, 15, and 17 editions of the game respectively. Madeon has released two albums, the most recent being Good Faith, which was released last year. During live performances, Leclerq often does mashups of his own songs, while also occasionally playing his unreleased songs. Some of his best songs include “Pay No Mind”, “Technicolor”, and “Miracle”.
A Day To Remember is a band whose sound is a blend of metalcore and pop-punk. Some of their songs are packed with gritty guitars with a few screams mixed in, so their music can be intense. You might remember that Marshmello released a song in 2019 called “Rescue Me” featuring ADTR, which was their first release in three years. They’ve since released a few singles for their upcoming album titled You’re Welcome, whose release has been delayed due to issues with audio mixing and the album artwork, as well as the pandemic. Their lead singer is Jeremy McKinnon, who League of Legends players might recognize due to his feature on “Take Over”, one of the songs in the game. A few of their hits include “If It Means a Lot to You”, “All I Want”, and “All Signs Point to Lauderdale”.
Rex Orange County is the stage name of English alternative pop musician Alexander O’Connor. His stage name originates from a nickname that a teacher gave him, being “The OC”, after his last name. He attended the BRIT School, a school specialized in arts and technology, which has notable alumni such as Adele, Amy Winehouse, and Tom Holland. O’Connor has released three studio albums, two of which were self-released; his most recent release is Pony, released in 2019. He also has a live album, Live At The Radio City Music Hall, which was released earlier this year. Fans of Tyler, The Creator may remember that Rex Orange County featured on two songs on Tyler’s album Flower Boy (those songs being “Foreword” and “Boredom”). A few songs to know include “Sunflower”, “Never Enough”, and “Best Friend”.
There’s no telling if these artists will come to Lollapalooza next year, and even if they don’t, hopefully, you’ll check them out and will have been able to “discover” new artists without having attended the festival!